Hopefully the summons did not come when he was snug in bed on a crisp fall evening, but if there were marauding pigs on the loose, it was the sworn duty of the hog reeve to find, capture, and wrangle the wayward swine to a secure location before it did any damage to valuable crops.  “Hog reeve” was just one of many parish officers who held an important position in colonial New Brunswick society. Continue Reading »

A portion of “Loyalists in the Classroom: Students reflect on historical sources” is reposted with the kind permission of our friends at Borealia:  A Group Blog on Early Canadian History.

Many people have asked me over the years: “why offer a course on the Loyalists of the American Revolution?” Continue Reading »

One aspect of The Loyalist Collection that distinguishes it as a useful resource for learning about early Atlantic history during British rule is the unique information it provides to patrons that has otherwise been largely forgotten or overlooked in the annals of history. One example of such unique information centres on the experiences of Colonel William Rhett, a prominent official who resided in South Carolina during the early eighteenth century. Continue Reading » 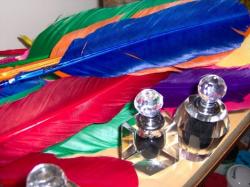 Researchers encounter an amazing variety of script (or sometimes more like scratch!) amongst the handwritten documents produced in the eighteenth and nineteenth centuries.  To become adept at interpreting historical cursive writing, readers must develop particular skills over time.  The art of reading and analyzing historic handwriting and manuscripts is called palaeography. Continue Reading »

Edward Winslow was a key Loyalist figure in New Brunswick, but he is also important because of the staggering number of his letters that survive to this day, in what is now called the Winslow Papers. Continue Reading »

“A letter of marque came from the king to the scummiest vessel I’d ever seen,” is a line which rings familiar to many ears thanks to Stan Roger’s popular song, Barrett’s Privateers (1976).  Letters of marque were issued by nations during times of war allowing privateering activity, which consisted of the seizure of valuable cargoes or whole ships belonging to enemy nations, an approach to war often termed guerre de course.  The Loyalist Collection contains a wealth of material linking Loyalists to the large Continue Reading »