Hopefully the summons did not come when he was snug in bed on a crisp fall evening, but if there were marauding pigs on the loose, it was the sworn duty of the hog reeve to find, capture, and wrangle the wayward swine to a secure location before it did any damage to valuable crops.  “Hog reeve” was just one of many parish officers who held an important position in colonial New Brunswick society.

The annual appointment or election of parish officers, recorded in detail within the New Brunswick County Court of General Quarter Sessions of the Peace, directly related to the socio-economic structures of early New Brunswick communities through the roles and persons which were deemed important.  The challenge in examining parish officers comes in deciphering very specific terminology, often written in small and hurried handwriting. 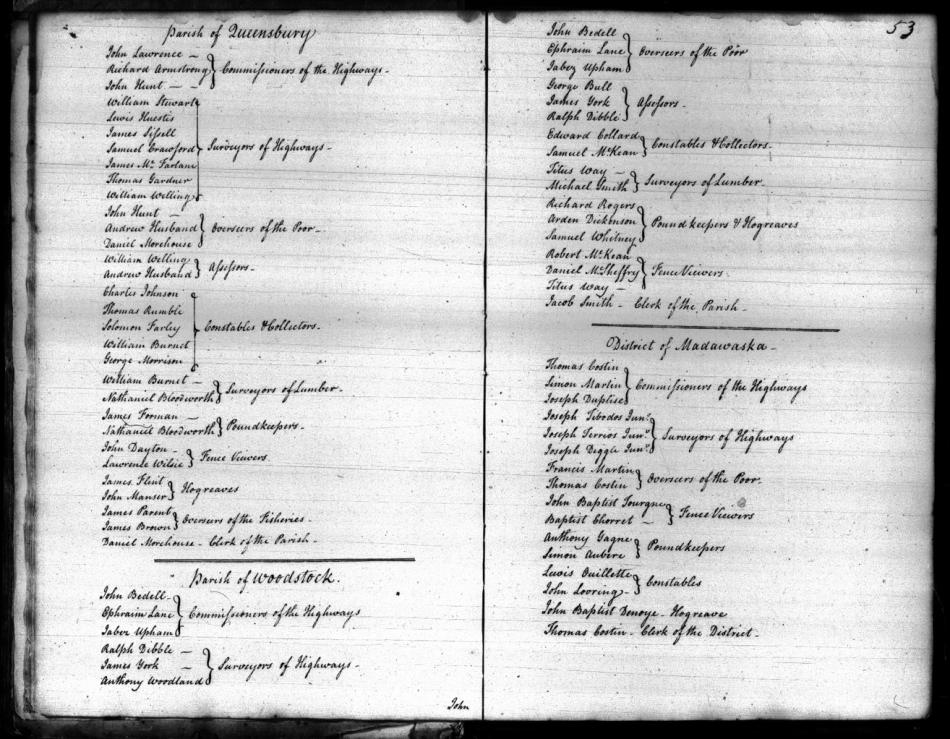 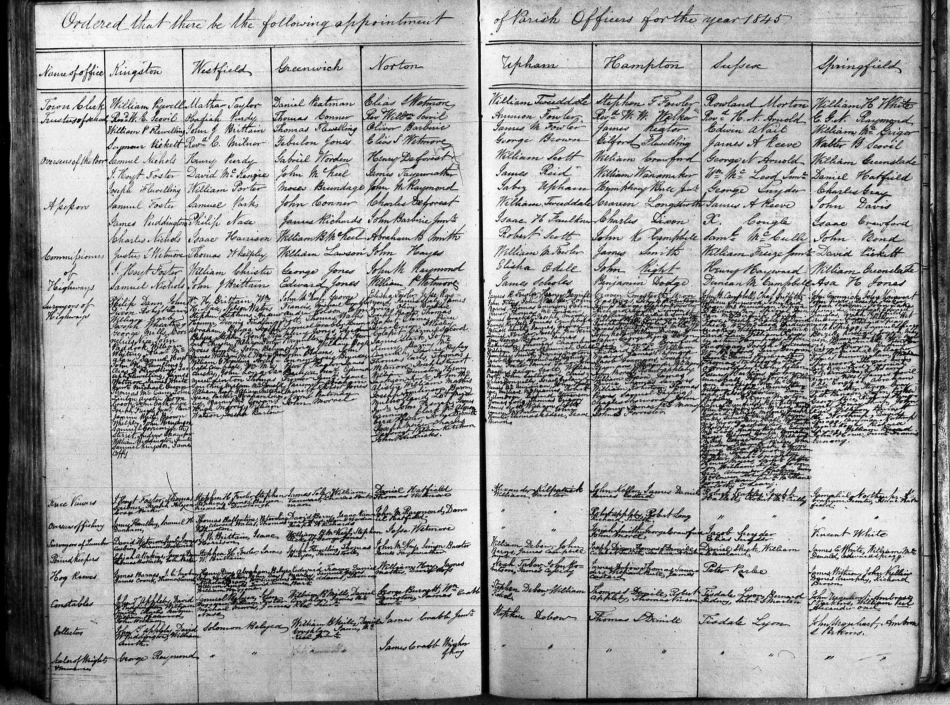 A careful clerk versus a hurried clerk’s work trying to save space recording parish officers!

The most numerous parish officers appearing in New Brunswick were the surveyors of highways, who supervised road crews recruited through statute labour.  The high number of surveyors of highways makes sense for New Brunswick, as roads were badly in need of improvement and expansion.  Other positions, however, held more prestige such as the commissioner of highways or highway commissioner who laid out and administrated roadwork and the overseer of the poor who reported on the state of the poor in the parish and distributed funds.

Titles of parish officers which give the modern observer a sense of anachronism are those of the fence viewer, responsible for inspecting fences and property boundaries in days when “Sharp’s brook to Hayward’s big oak” were legitimate property boundaries, and the hog reeve who caught stray livestock, especially hogs who could be very damaging to crops if not “ringed and yoked” to prevent them from digging and breaking fences.  The pound keeper then maintained the enclosure to board stray animals which the hog reeves may have captured; the owner would then have to pay a fee to retrieve their delinquent livestock.

Hog reeve was a parish office position which was filled year after year in varying numbers.  There is evidence, particularly in New England, that the office was assigned humorously to recently married men, implying that these “boars” had been brought to heel.  It is unclear, however, if this tradition continued in New Brunswick as more research is needed.

Some patterns of family inheritance of the position do appear in New Brunswick.  For example, hog reeves in the early years of Kingston Parish, Kings County included several members of the Cronk family—Asa, Joseph, Henry, and James Cronk—descendants of David Cronk, a New York loyalist granted land in Long Reach, Kingston Parish.  James filled the role from 1821 to 1850, but then his name stops appearing; and perhaps an explanation for this disappearance comes from an 1852 newspaper article which lists a James Cronk as a passenger on the ship Amelia bound for Australia from Saint John.

Some parish offices were specific to particular counties, likely related to the type of industry that was practiced within the area.  Parish officer positions in counties strongly involved in the lumber trade included the boom master who oversaw the movement of logs on the river and the surveyor of dams.  The surveyor of dams was called upon when someone wanted to build a sluiceway to drive lumber over a dam for approval.

More unusual parish officers included the culler of turkey, who inspected turkey for export; the sealer of leather who approved (usually by stamping or “sealing”) leather items that had been inspected and tested; and the weigher of hay who weighed, inspected, and marked bundles of hay for sale.

Although the roles filled by parish officers in New Brunswick’s past have become unnecessary as social and economic structures have shifted, the lists of these men’s names and titles provide a taste of life in colonial Atlantic Canada.