Edward Winslow was a key Loyalist figure in New Brunswick, but he is also important because of the staggering number of his letters that survive to this day, in what is now called the Winslow Papers. While the University of New Brunswick’s Archives and Special Collections holds the originals, for ease of access the collection is accessible in The Loyalist Collection and online through UNB Libraries.

Because of Winslow’s surviving papers, the amount of literature about him is astounding and readily available through the Dictionary of Canadian Biography and the University of New Brunswick’s Archives and Special Collections’ biography, to name a few sources.

Therefore, to whet the appetite, here are some fun facts about this key Loyalist figure:

1. Because of his personal involvement with Loyalist ideologies he was drawn into not only one duel, but two!

2. Winslow shares the name of Edward Winslow, a direct ancestor of his who was on the Mayflower in 1620.

3. There are suggestions that when Winslow tried to create a new province out of Nova Scotia, this new province (what is known today as New Brunswick) might have been called “Guy” after Sir Guy Carleton of Nova Scotia. However, there is some evidence that insinuates that Winslow (and perhaps with Jonathan Odell’s assistance) might have had a hand in stopping the province from being named “Guy.”

5. He was fined twice while in University “for making indecent and tumultuous Noises in the College” where he lived in Caleb Prentice’s rooming house. This house was also the location where he was once found by a Professor Wigglesworth, very drunk by midday. Winslow, then nicknamed Ned, gladly paid his fine.

6. In October of 1774 Winslow was chased by an angry mob (who didn't like his loyalist tendencies).

7. Winslow had a great skill for creative insults, such as calling Elias Hardy a “pettifogging notary public,” Richard John Uniacke “a great lubberly insolent Irish rebel,” and Jonathan Odell “a High priest of the order of Melchisedec.”

8. In a letter, Winslow wrote that if he were an instrument he “would chuse to be a fiddle because it would require some skill and taste to play upon me.” 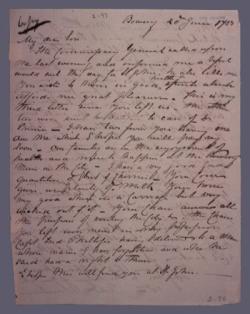 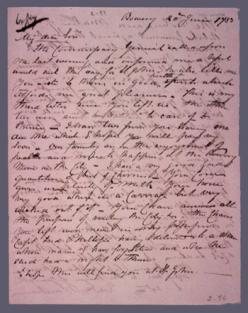 Yes – by God! we will be the envy of the American states. . . . When the people of the neighboring states shall observe our operations. When they see us in the enjoyment of a regular system of Government – protected by the mother Country – not sad’led with enormous taxes and compare their state with ours, Will they not envy us? Surely they will. Many of their most respectable inhabitants will join us immediately.

Annabelle Babineau is a student assistant for the Microforms and Government Documents, Data, and Maps Units at the Harriet Irving Library. She is currently completing her Bachelor of Arts in the English Honours Programme.