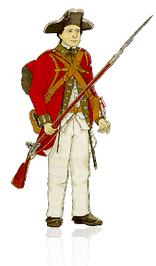 The King's American Regiment was raised at Flat Bush, Long Island, New York, on 12 December 1776, by Colonel Edmund Fanning. A significant percentage of its strength came from the Hudson River Valley, around New York City, Connecticut, and later Rhode Island.

The Regiment approached its full strength of approximately 500 men very quickly, and fought in compaigns in New York, Rhode Island, and in the Southern Campaign in South Carolina and Georgia.

One of the finest of the Provincial units, the Regiment was designated the Fourth American Regiment in 1779, one of only five regiments to be so honoured. It was taken on the British Regular Establishment, effective 25 December 1782. The Regiment was disbanded in Saint John, New Brunswick, in the autumn of 1783, and several hundred officers and soldiers settled as Loyalists in what is now the Province of New Brunswick, Canada.

The images of the officer, private soldier, and regimental buttons are accurate representations of the regimental dress for the King's American Regiment. The button, with the letters "RP," signifies Royal Provincials.